During the summer, the Club hires lots of new staff to ensure we can continue to provide quality programming and services to all of our members. One of our new staff members just so happens to also be one of the defensive backs for the Boise State Broncos: Tyler Horton. Tyler has been a hit with the kids and they are completely star struck whenever they see him.

Since Tyler plays football and Hannibal Miksis, another Youth Development Professional at the Moseley Center, routinely goes to the gym they are both in excellent physical shape. The kids love to ask them who is stronger whenever they see them together and had begun challenging the two to a push-up competition. Initially, both Tyler and Hannibal declined, and whenever the kids asked who would win, they would just say the other person would to temporarily end the debate. Eventually, it got to the point where the kids and enough staff wanted to see it, and Tyler and Hannibal finally agreed to settle the debate once and for all! Hannibal recounts the neck-and-neck competition: 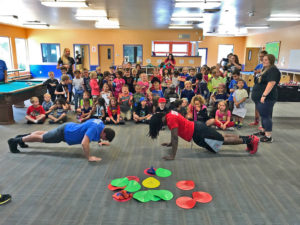 ”Tyler and I both got on the ground next to each other, had other staff keep count for us, and we started to do push-ups. I got in a good rhythm and kept my head down so I could stay focused. I started to get tired after completing 50 pushups, but when I looked up, Tyler was still going so I kept going, too. At 60 pushups, I was really tired but felt like I could still do a few more. I completed 64 push-ups with my head down when Cam, another YDP, tapped me on the head and told me that I had already won. The final score was 64-60 and to be honest I could not believe it. I thought for sure that Tyler was going to beat me and so did the kids. The push-up contest was all in good fun and we were able to carry on the rest of the day’s activities.”